Free US shipping for all orders $100+

Iceland has been on our bucket list for years – the landscapes, wild places and a chance at a specimen brown trout in its native range have all been pulling us north. A huge thanks to our friends at Fish Partner who helped us put together an epic trip itinerary including all lodging and logistics. Keep an eye out for parts II and III of this saga…
The wind built the whitecaps up into waves more reminiscent of the ocean than of a lake. Looking out over Lake Thingvallavatn it was easy to see why – with a surface area of over 32 square miles, fishing this lake from the shore can be more akin to surf fishing than what we normally think of as trout fishing. We could smell the spray in the air as dark shreds of clouds raced across the sky. For early June, the weather was cold, even by Iceland standards. It seemed like perfect conditions for big fish in a lake to be fired up, the only problem was that the trout did not seem to agree. We fished on. Somewhere out in the deep of the lake there are wild brown trout over 40”, that thought kept us casting through the worst of it.

We landed a few fish day one, but they were not the Ice Age monsters we were after, and by day three we were getting pretty hungry for a solid one. Our luck shifted on a smaller lake that is connected (at least occasionally) to the big lake. The fish in this shallow lake color up with beautiful spot patterns because of the change in environment. Instead of the chrome and black of the deep-water browns in the main lake, their butter quotient is higher than a stack of pancakes. Our longtime friend and travel companion Woody put us on the board with a buck that had it all - measuring into the high 20’s, he had the spots, turquoise cheeks, golden hue, and the big jaw. We found a few more good ones and happily savored some Icelandic micro brews. 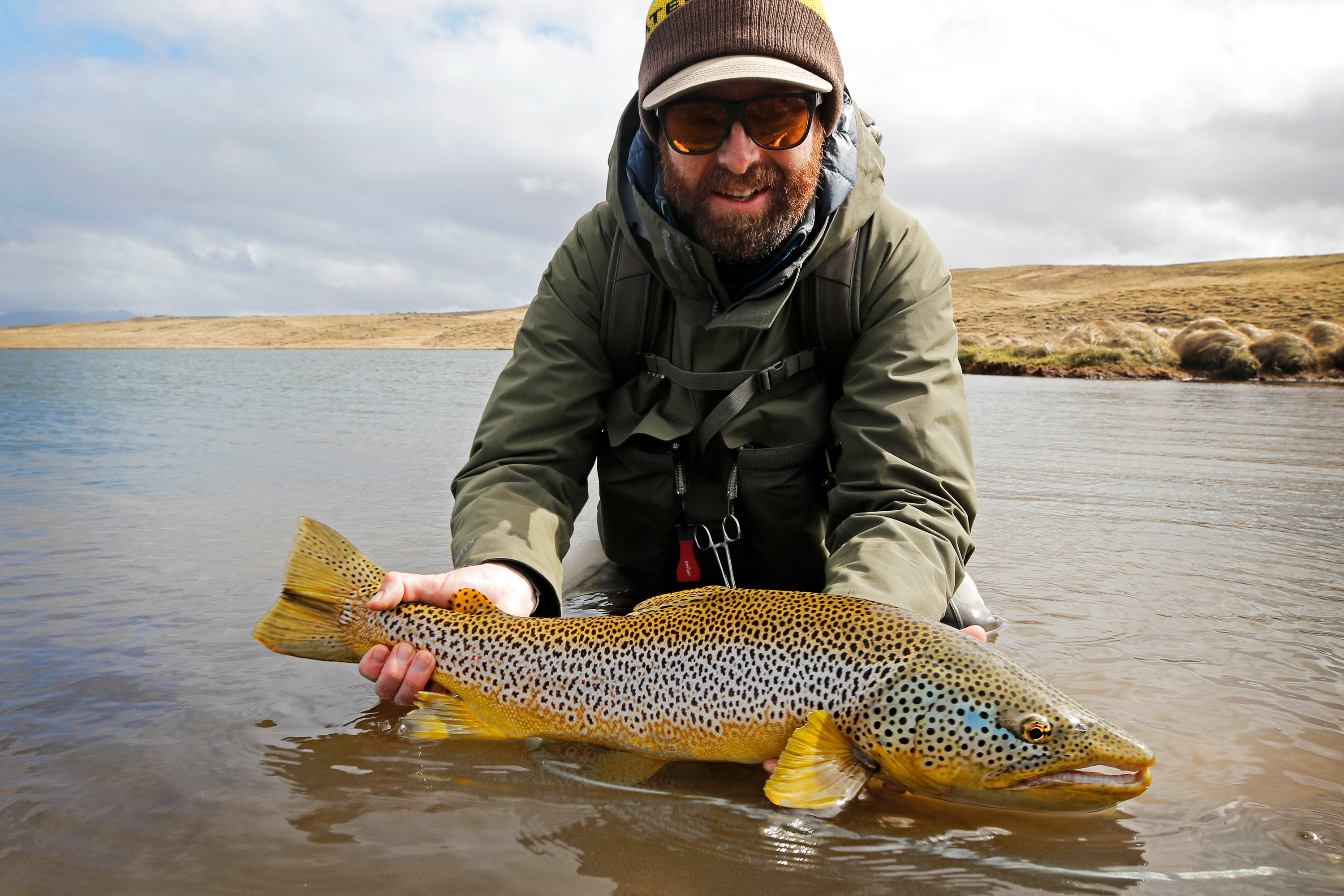 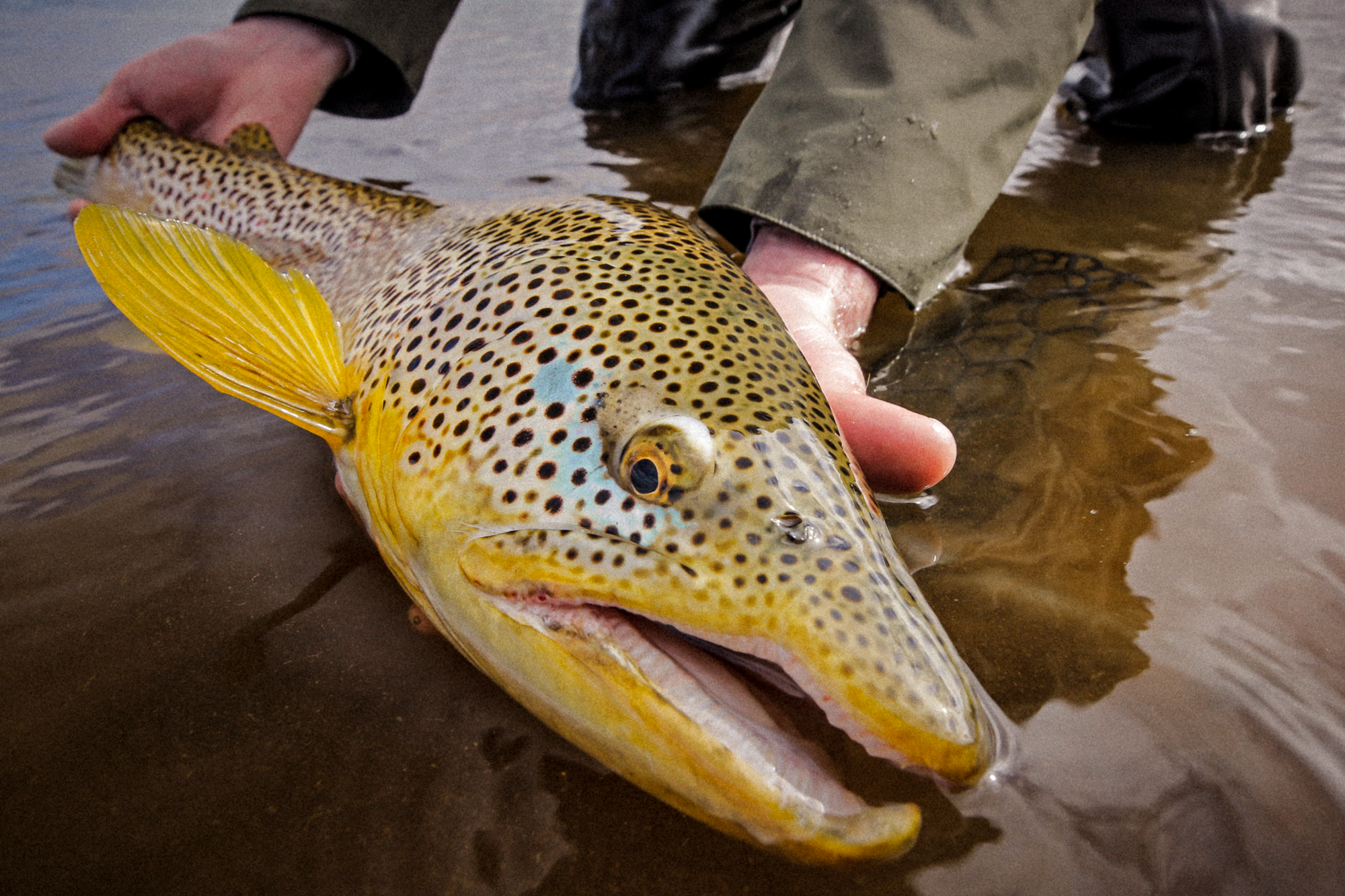 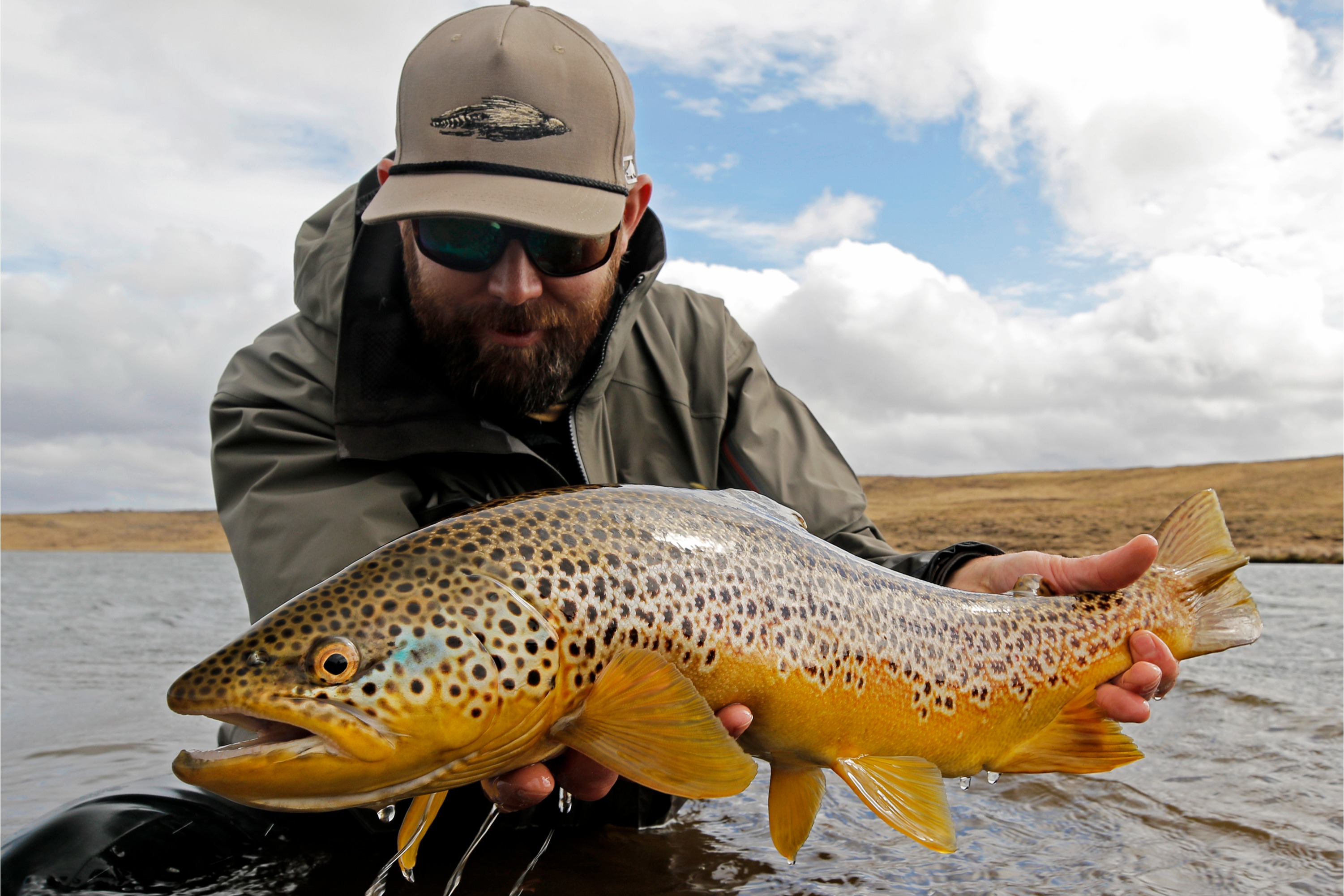 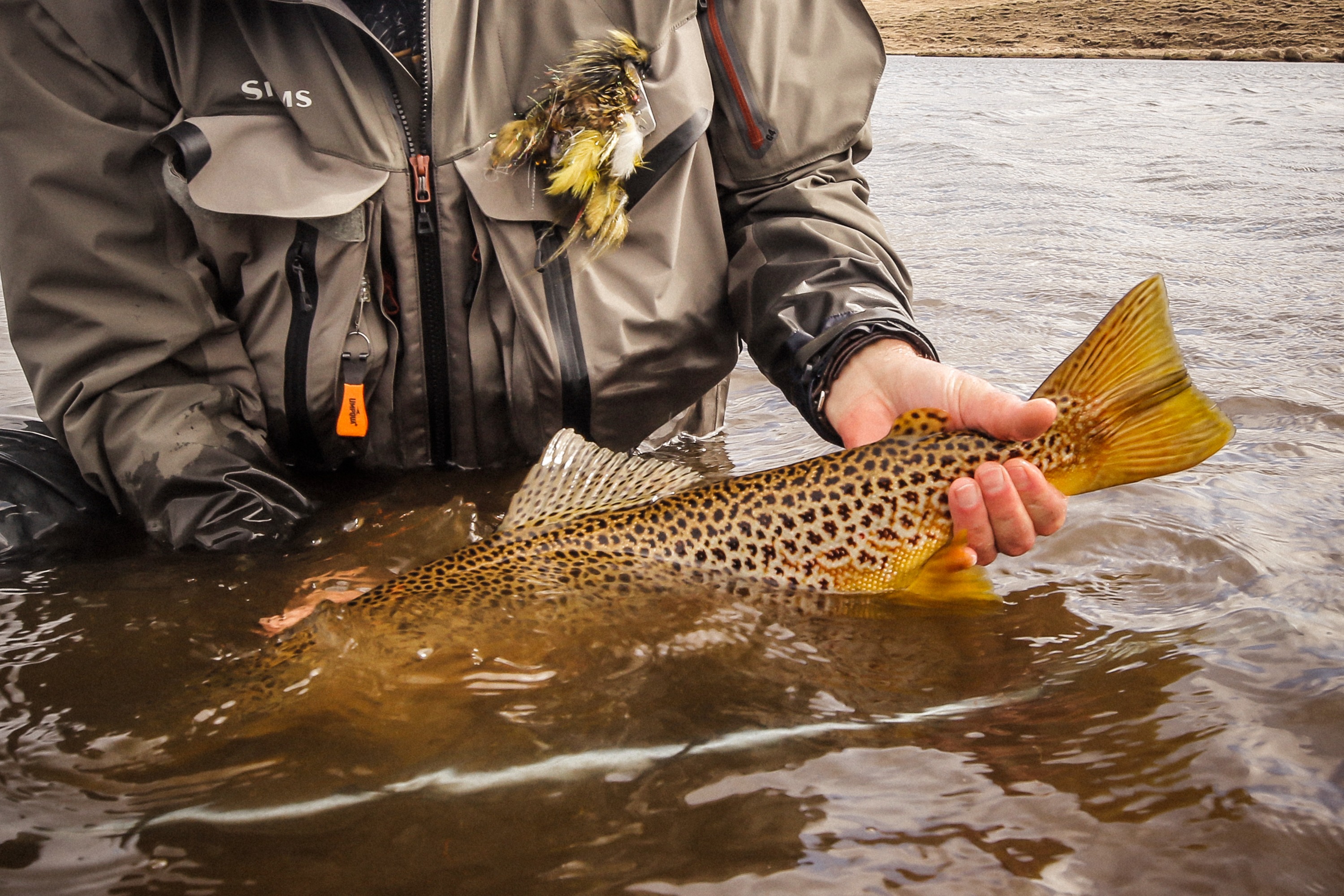 With one more day to find a solid one out of the main lake, we headed to a new area consisting of rolling volcanic rock outcroppings and deep fissures. Situated right where the Eurasian and North American tectonic plates come together, stripping streamers through these seemingly bottomless cracks is one of the more unique trout fishing experiences we have had. Picture a 6-8’ wide trench that goes from your feet into the depths of the lake. Just a cool place to spend the day. Unfortunately, the weather took another turn for the worse. The rain ripped in at an angle, the waves kicked up and everything was damp and cold. Everything. Maintaining good line feel with cold, slow and soggy hands was a challenge. When Woody took a wave over the hood of his wading jacket after six hours without a grab, we headed back to the lodge for a re-group and a stiff drink. 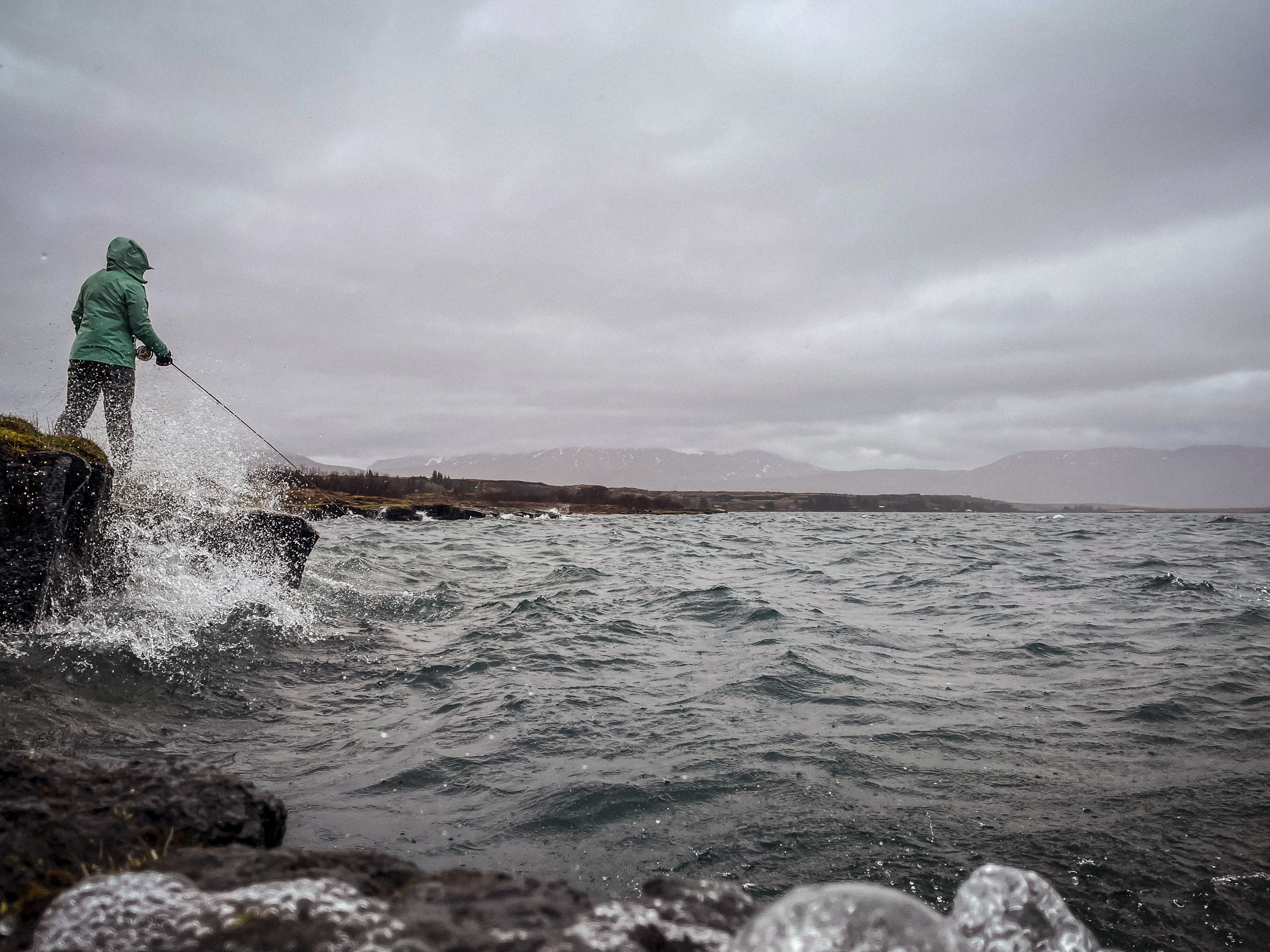 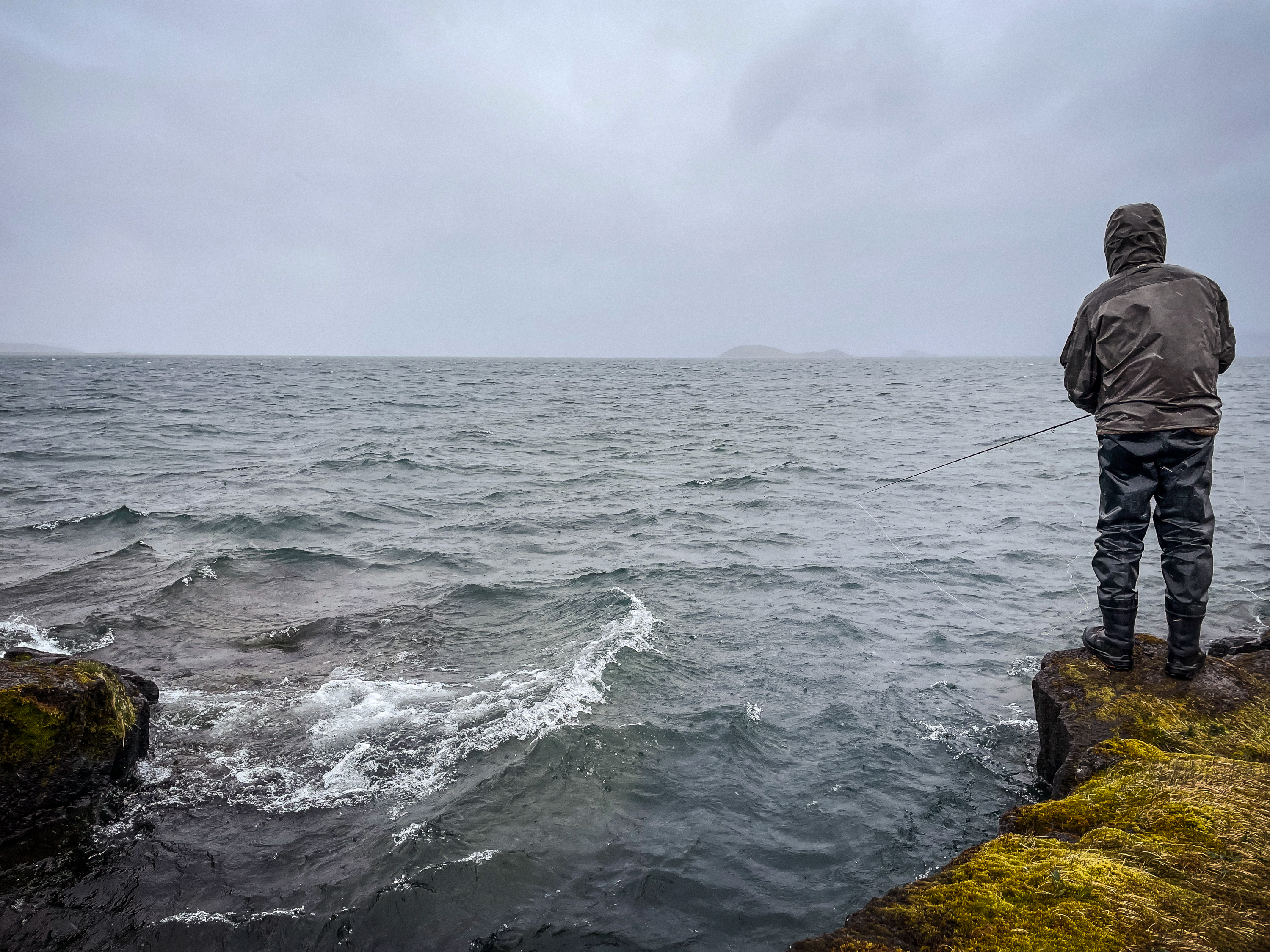 One of surreal things about fishing in Iceland in June is that it does not ever really get dark. With that in mind we geared up for the late-night mission. As we stood on the mossy rocks checking our leaders and swapping out our streamers, the mood had shifted on the lake. The clouds cracked, the wind laid down to breeze and the subtle chop on the water had that big fish energy. It took a few hours, but as the midnight twilight spread over the mountains, we got some shockingly solid grabs. Because of their ancestry and due to the deep, cold, clear water, the browns from the big lake have a truly Ice Age look to them. They are heavily spotted, with turquoise cheeks, but almost no yellow, orange or red.

As we fished into the early morning, I threw a back hand cast out into one of the deep volcanic cracks we were focusing on – let the line and streamer sink, one, two, three, four – and then started a slow strip. Two strips in, my line just stopped. I thought for a split second I had snagged on an unseen rock, then I felt the head shake. Unlike the other fish we had fought from this area, this fish did not bulldog down into the depths of the crevasse where I hooked him, he went for the middle of the lake at full speed. The power of this fish was a different caliber. After a scorching return run and some tug of war on my 1x, he was in the net. At 32”, this fish is the largest brown trout I have brought to hand and one that I will always remember. 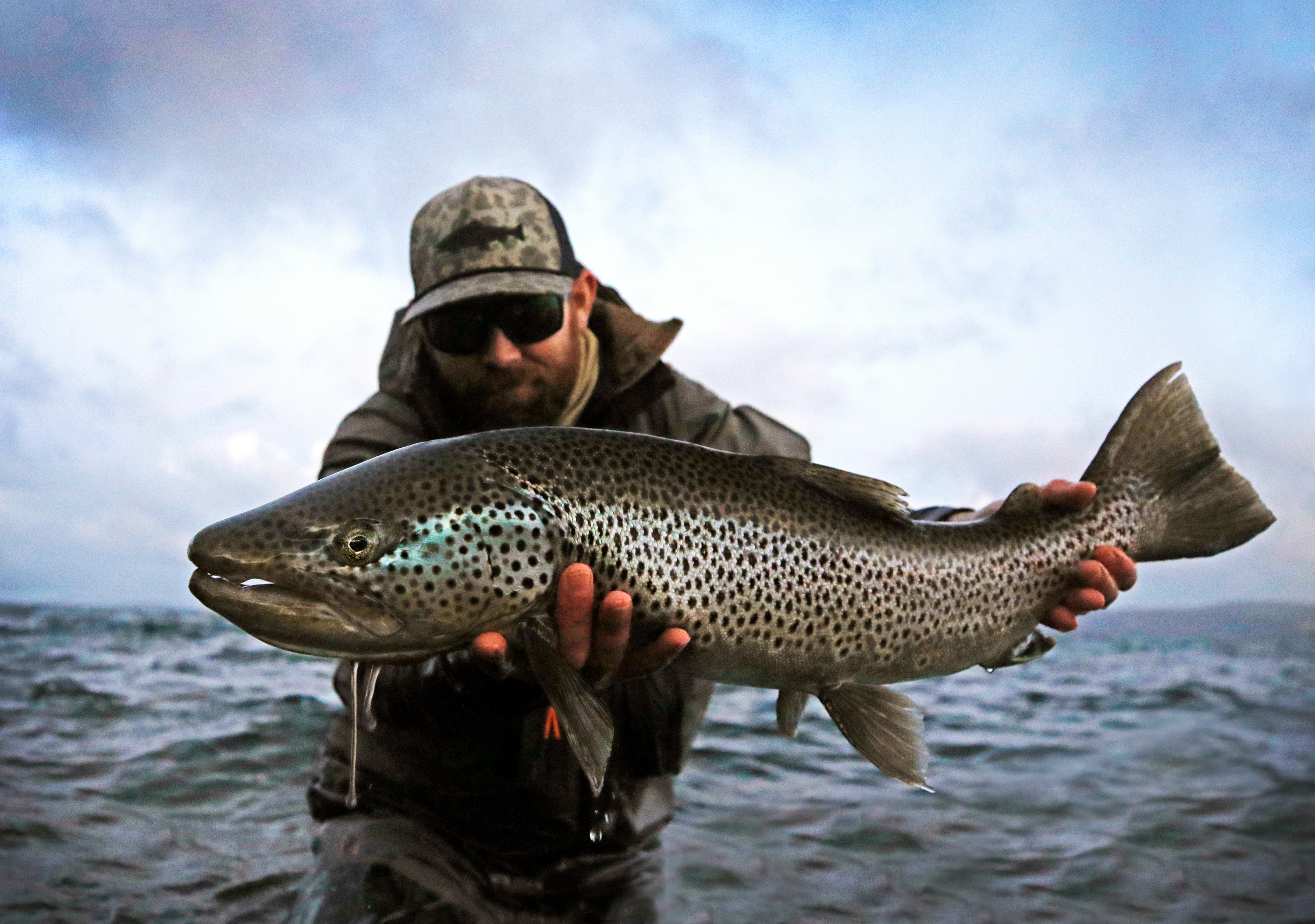 The lineage of the Brown Trout in Lake Thingvallavatn can be traced back roughly 11 thousand years to when their sea run ancestors populated the area. About 9 thousand years ago they became landlocked and cut off from the ocean, but they retain many traits of their ancient sea-run ancestry. They do not reach sexual maturity until they are 5-8 years old and only return to spawn every 2-3 years, they are truly unique native specimens.   For more information on fishing in Iceland or to book a trip, check out the Fish Partner website: www.fishpartner.com. 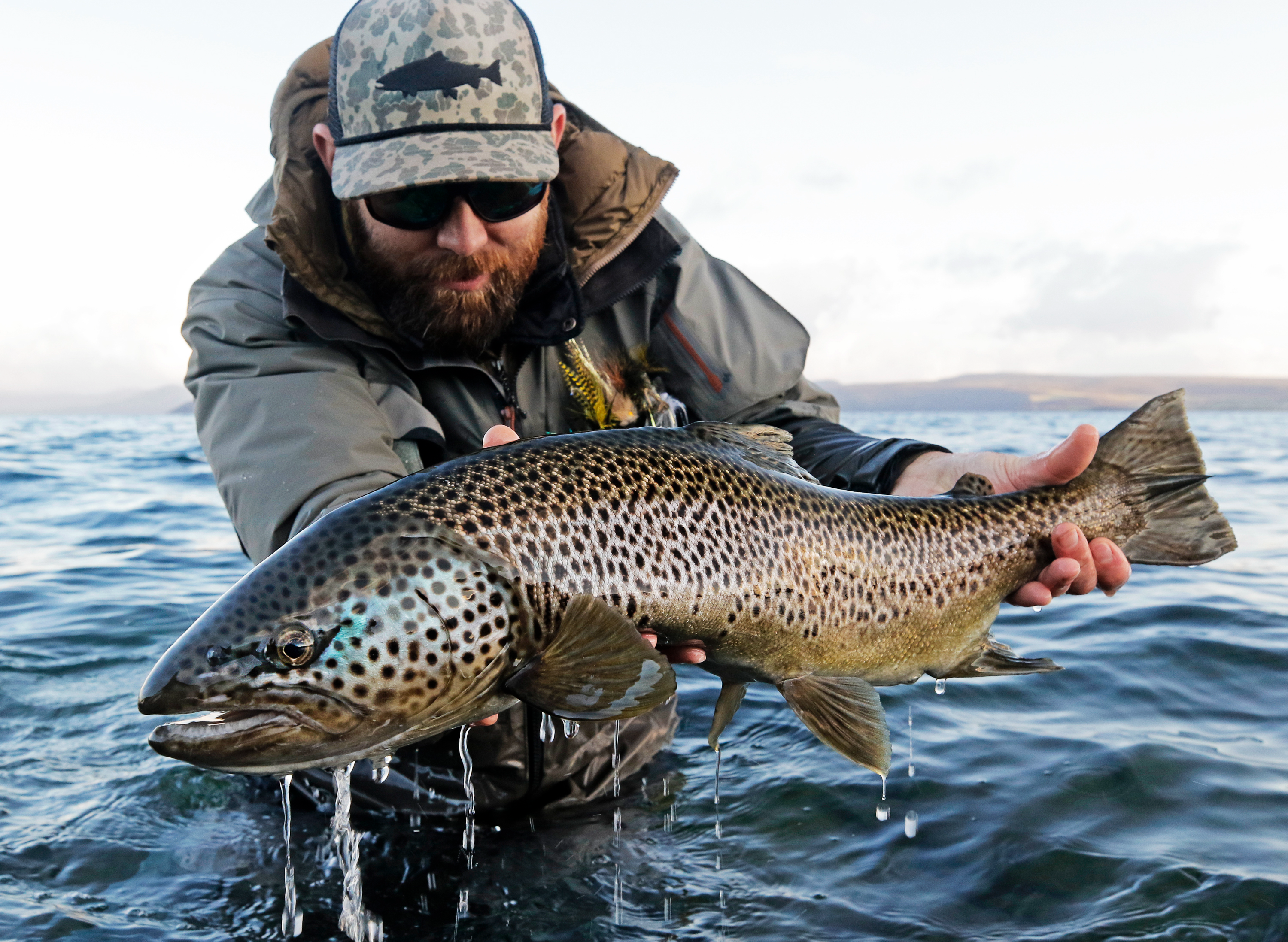 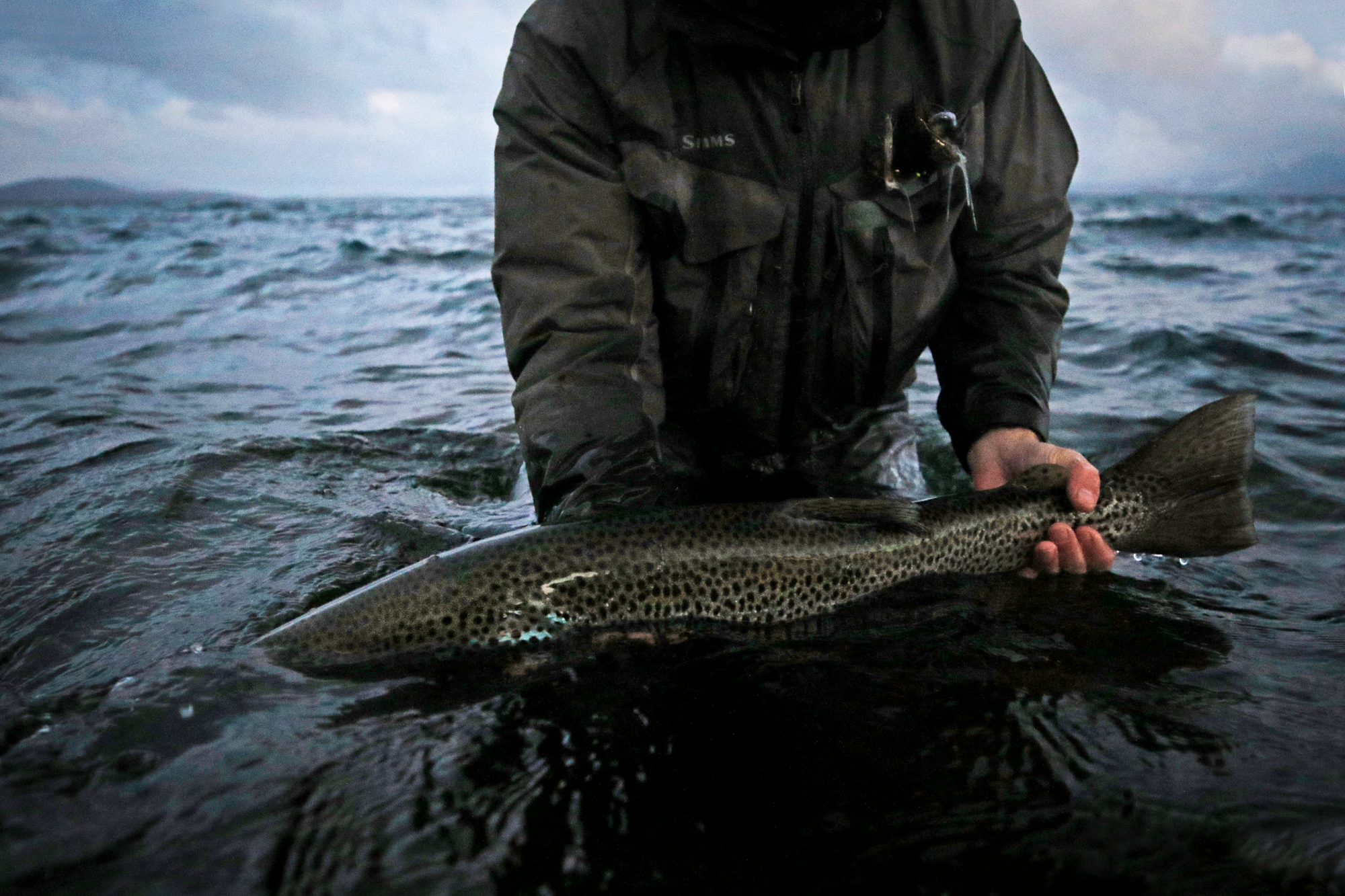