Written by Garrison Doctor
Previous / Next

While almost all of us are locked down waiting for this terrible pandemic to run its course, I am revisiting some favorite destinations and adventures that I have taken over the past few years with my partner in business, life and adventure, Corinne. While we have always been extremely grateful for the opportunities to go on such explorations, our current crisis certainly lends a new perspective and appreciation. It also re-affirms our commitment to get back out and explore, whether near or far, when this virus passes, and it will pass.

There are not that many places in the world today where you can fish a relatively large river system that is completely untouched by modern man made infrastructure of any kind for hundreds of miles. The Secure River in the Bolivian Amazon is one such place. Located in a National Park and Indigenous territory at the foot of the Andes, this river system offers the fly fisherman the opportunity to fish a system that has no dams, no adjacent roads and no agricultural use. And the biomass in the river reflects it! Untamed Angling operates one of their Tsimane Lodges here, and we were lucky enough to go there and explore in search of Golden Dorado, Pacu and a few other river dwellers. 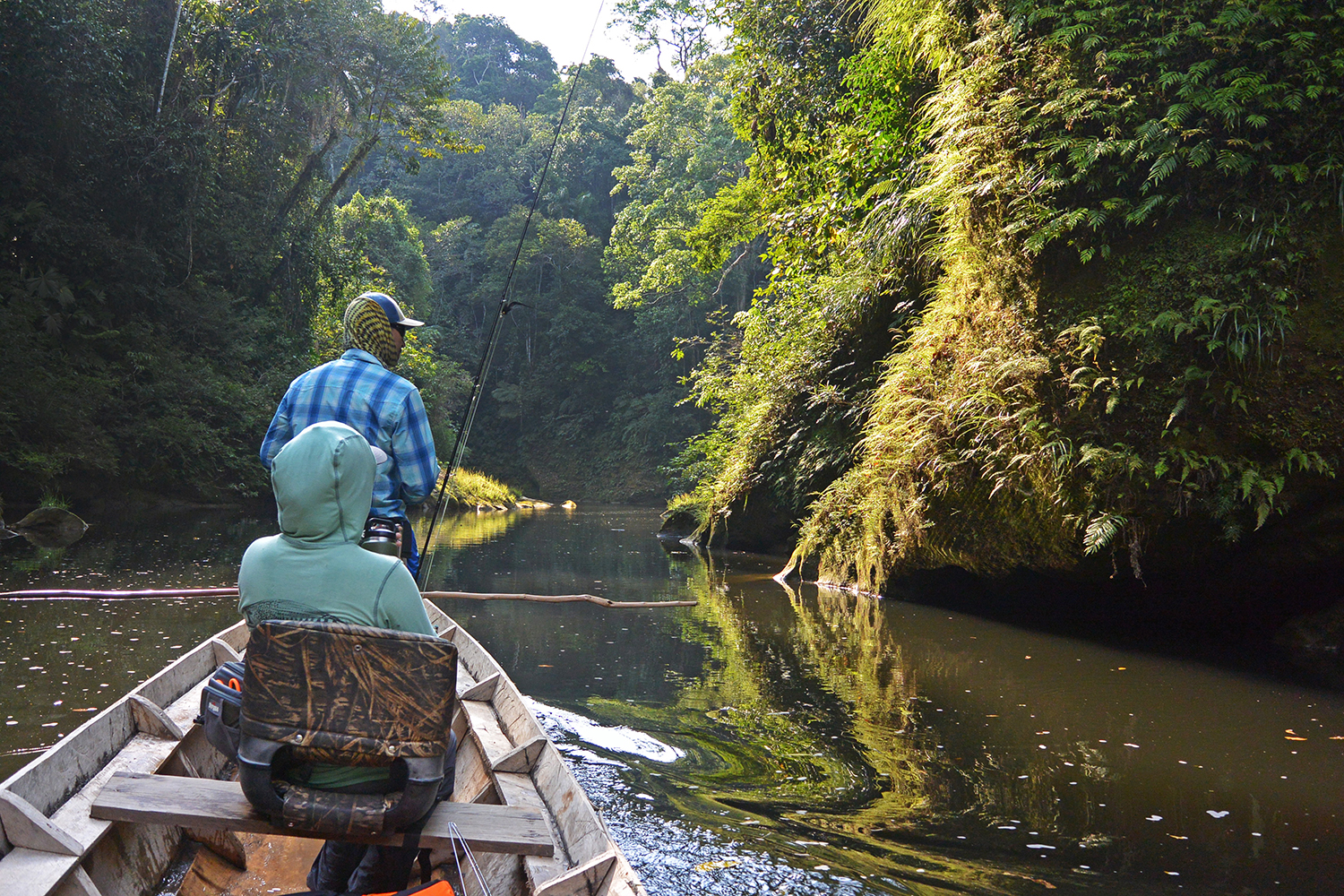 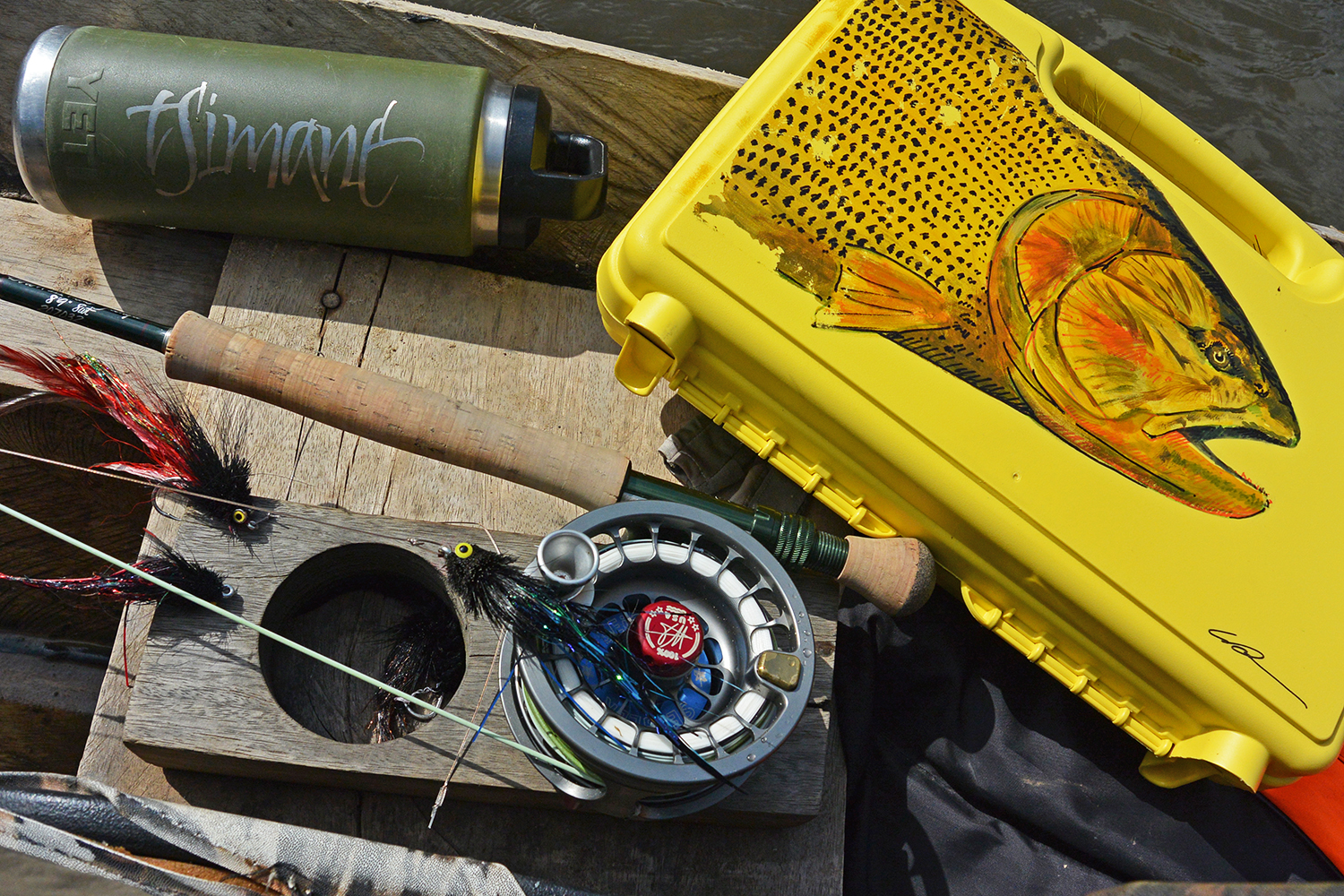 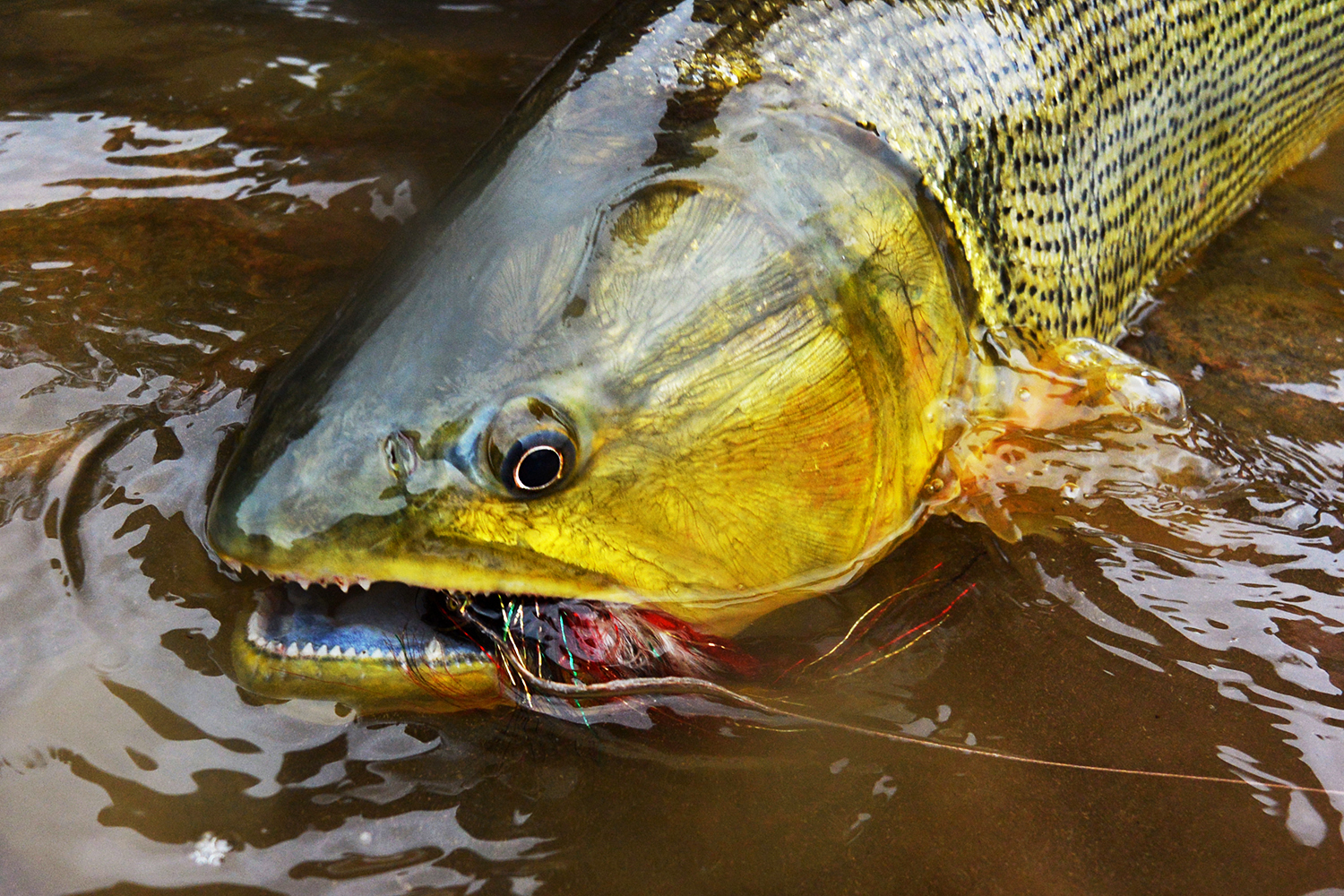 Golden Dorado are a fish that in my estimation are so unique that it is tough to compare them to any other freshwater fish. But if forced to, I would compare their tendency to seek out structure once hooked to a big brown trout (they love log jams), and their proclivity to jump as soon as you stick them to a baby tarpon. However, neither of those fish have cutting teeth that can take a clean bite out of any other fish like a small shark, and neither of those fish hunt in schools with the aggression and violence of Golden Dorado. When a group of them gets a school of baitfish cornered, the river literally erupts into whitewater froth similar to a jack frenzy on the surface of the ocean. 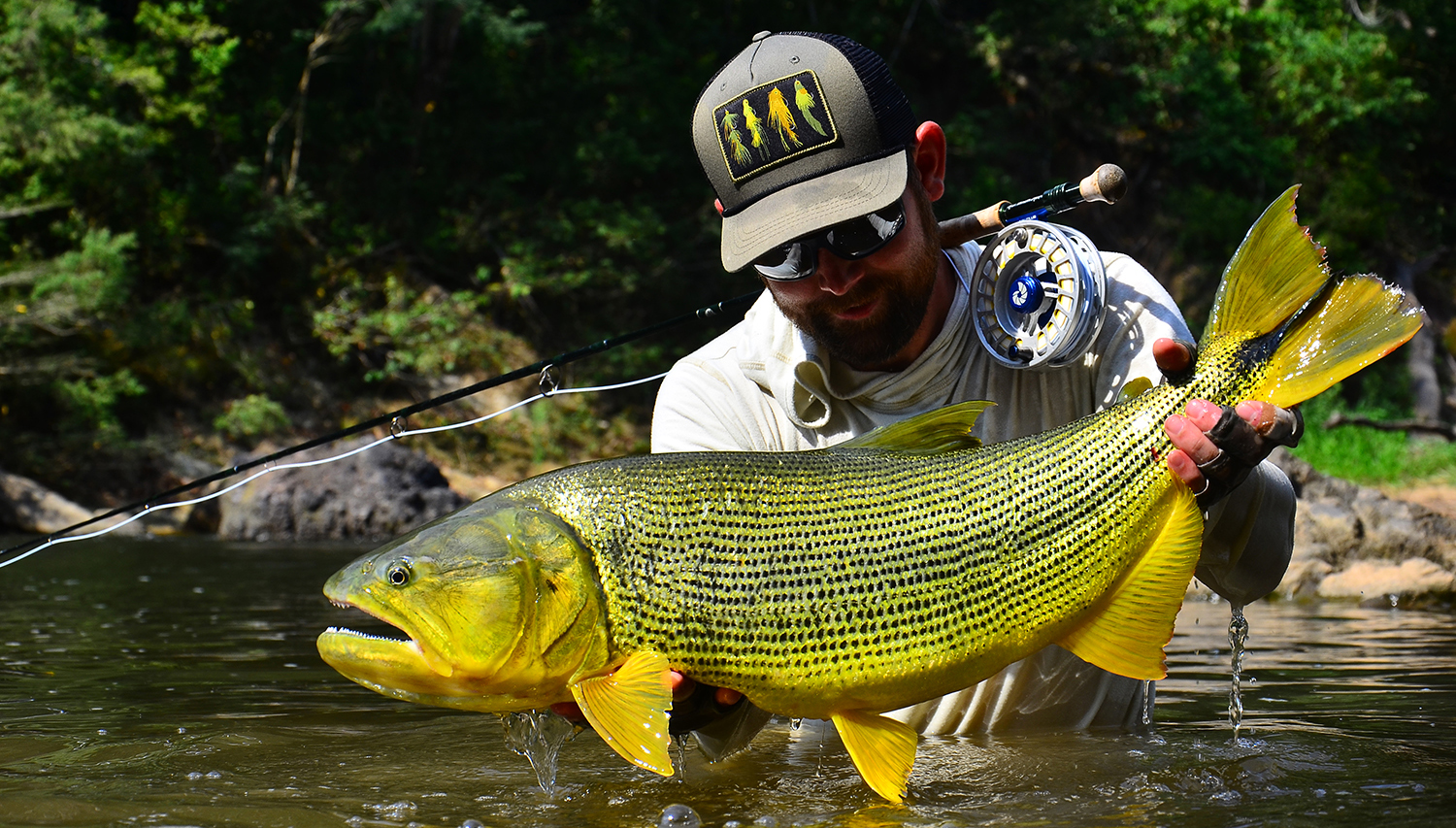 One piece of this Golden Dorado hunting strategy that is particularly challenging for the fly angler is that they love to steal bites of fish out of each others mouths. In other words, if one grabs a fish like a dog bone, his peers will try to bite chunks off of the side. In practice this means when you hook one, his buddies will try to bite at the fly. If they do, it usually results in a flossed line, and if that fish gets above your standard 40lb wire bite tippet you are toast.

So picture me on a rocky gravel bar looking at a run not dissimilar to a trout stream - deep fast current with a log jam on the far side creating some great structure and soft water. I cast a 3/0 black over red deceiver at the log jam and strip it out, fast. Golden Dorado like a retrieve more akin to a saltwater fish - pretty fast to really fast. As I strip out from the log jam I get lit up by my first fish that is well over the 5lb mark. The first thing our guide Santiago does, is run full speed into the run at the fish I just hooked! I look at him like what in the flying f*%ck are you doing? He was of course attempting to scare off his buddies so they would not floss my line! 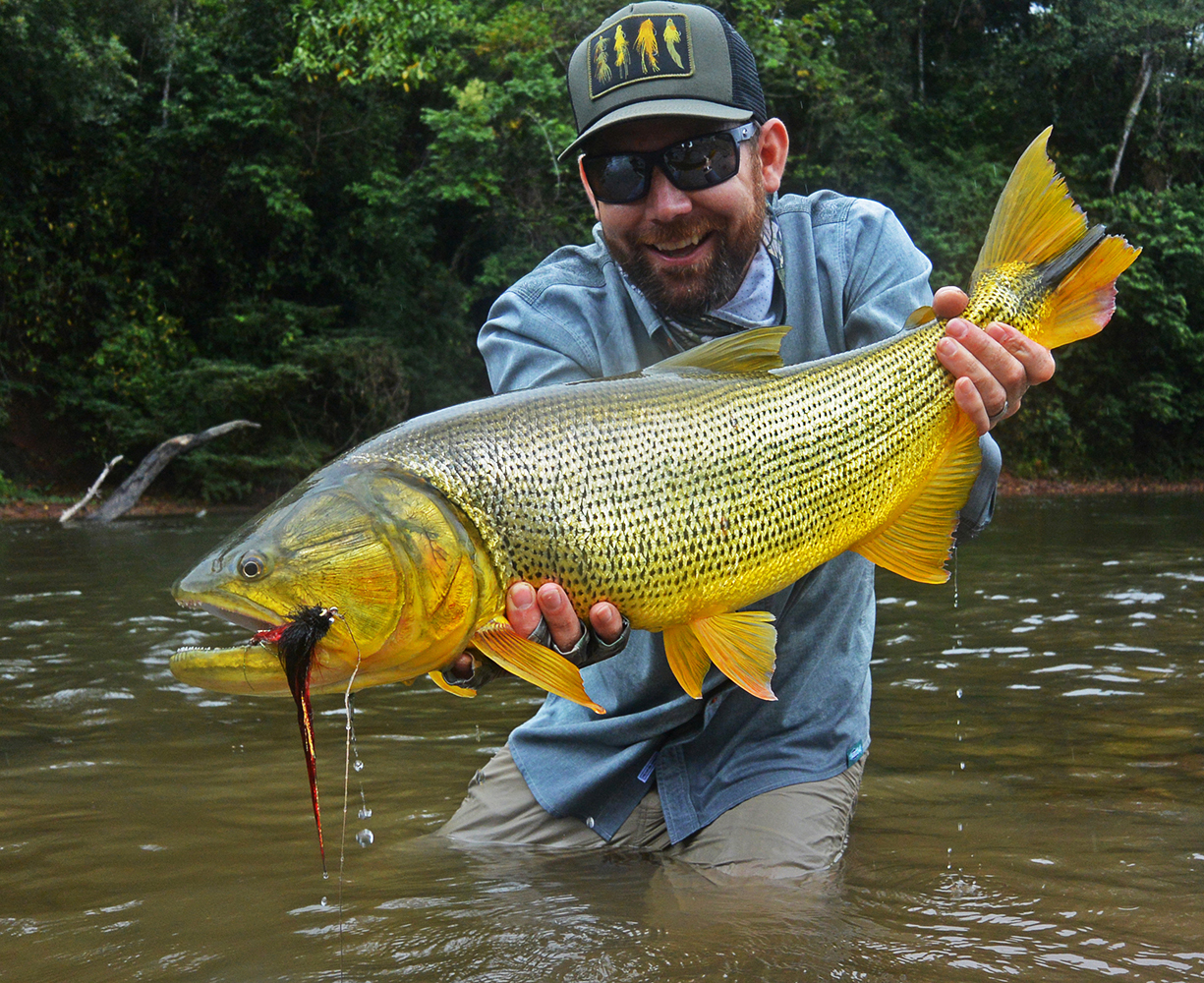 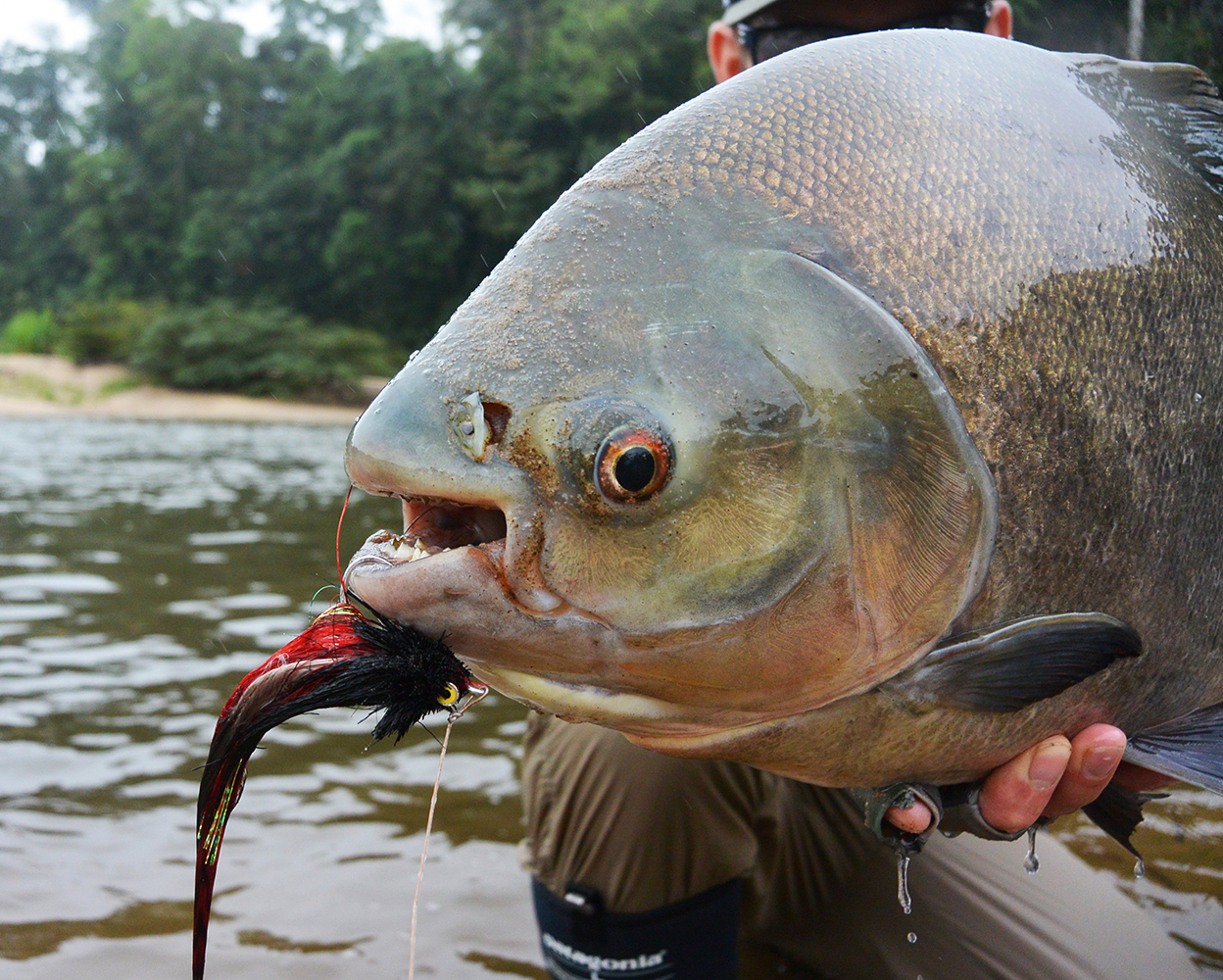 The other primary fish to target out of the Secure River Tsimane Lodge is the Pacú. One of the largest relatives of the Piranha family, Pacú are not specialized meat eaters but rather omnivores that eat more plant material - nuts, fruits, berries, flowers and leaves. Although they will definitely eat other fish or even other animals that fall into the river given the opportunity. They patrol deeper pools and investigate most things that "plop" into the water. Because of their diet they're teeth are extremely powerful and bare an uncanny resemblance to human teeth. It is a strange experience the first time you get in there with a forceps to free your fly!

Pacú unlike Golden Dorado do not typically jump. They are an unusual freshwater fish in that the RUN, no messing around, no stand and fight headshakes, no jumping around, they just RUN. And fast. These intense distance runs, wariness and pickiness in taking flies has earned them the nickname "the Permit of the Jungle". 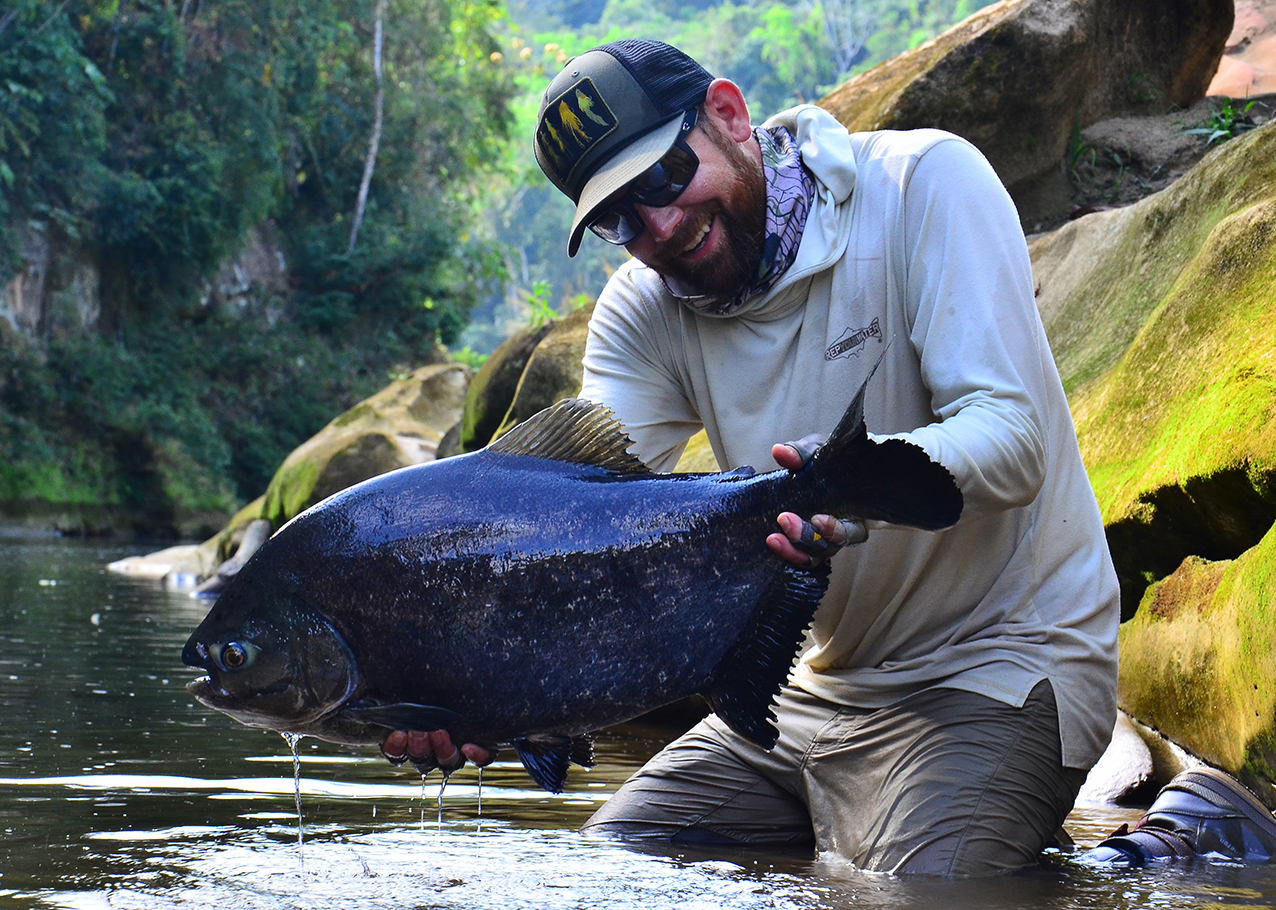 I had the opportunity to set up on the far side of a deep, slow canyon run on a day when the water was running crystal clear. There I watched as a big Pacú fed in an eddy on the far side. Their coloration varies, but some of the larger ones like this one was getting really dark, almost black with a purple sheen to them. After patterning this fish for a while I was able to blast a cast with a clipped deceiver over to him. You want to cast in such a manner that your fly really hits the water with a pronounced "plop" - as if it has fallen many feet from a huge overhanging tree. As soon as my fly hit the water he sprinted the 3' to it and hammered it. Game on. I do not think I have ever seen my fly line rip off of my reel that fast in freshwater...

On another day we were fishing well down river from the Lodge, here the river changes character and spreads out into many braids, runs and sandy dropoffs. The water was a bit off color after a hit of rain so sight fishing was out. This does not necessarily mean a dropoff in productivity, many times just the opposite, but it does mean more blind fishing at log jams, drop offs and rocky structure. Corinne was positioned upstream from me working a drop off on the far side of the run when she snagged on a log or some such, not uncommon when the visibility is down. Except when Corinne and our guide waded out towards the snag to see if the fly was recoverable, the "log" began to slowly motor upstream. That is when Corinne new that she had a fish of some sort on, but definitely not a Golden Dorado or Pacú! As Corinne crossed the river half a dozen times chasing this fish that continued to bulldog around the river, I was helpless to assist. So I naturally proceeded to bark stereotypical and inane advice at her like "keep it tight" repeatedly. You do what you can. After a good battle she was able to get the fish into shallow water and we were able to tail the Surubí catfish. It was a specimen, with the characteristic graffiti like calligraphic markings all over. It proceed to grunt, croak and bark at us until Corinne sent it back into tea colored water. 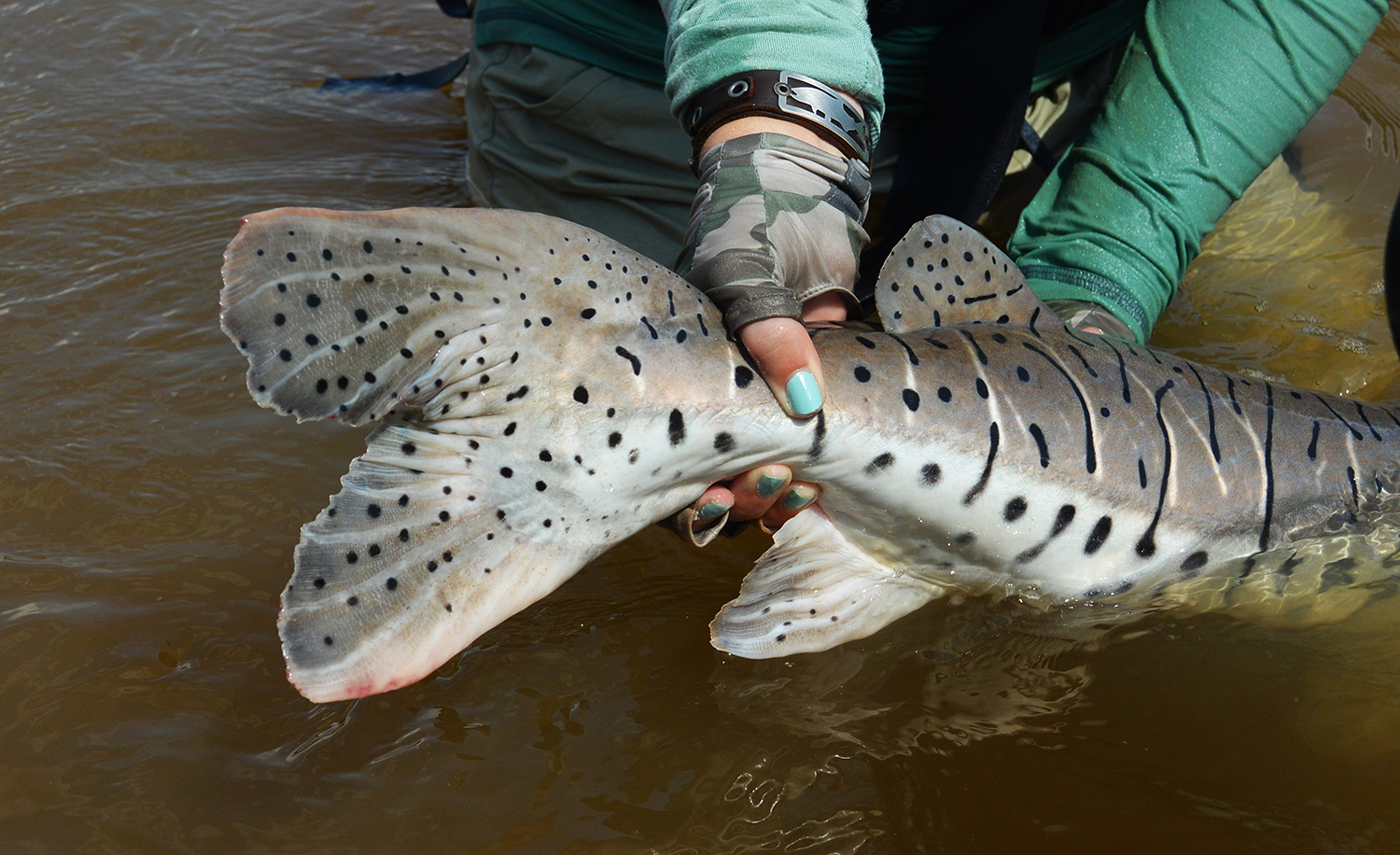 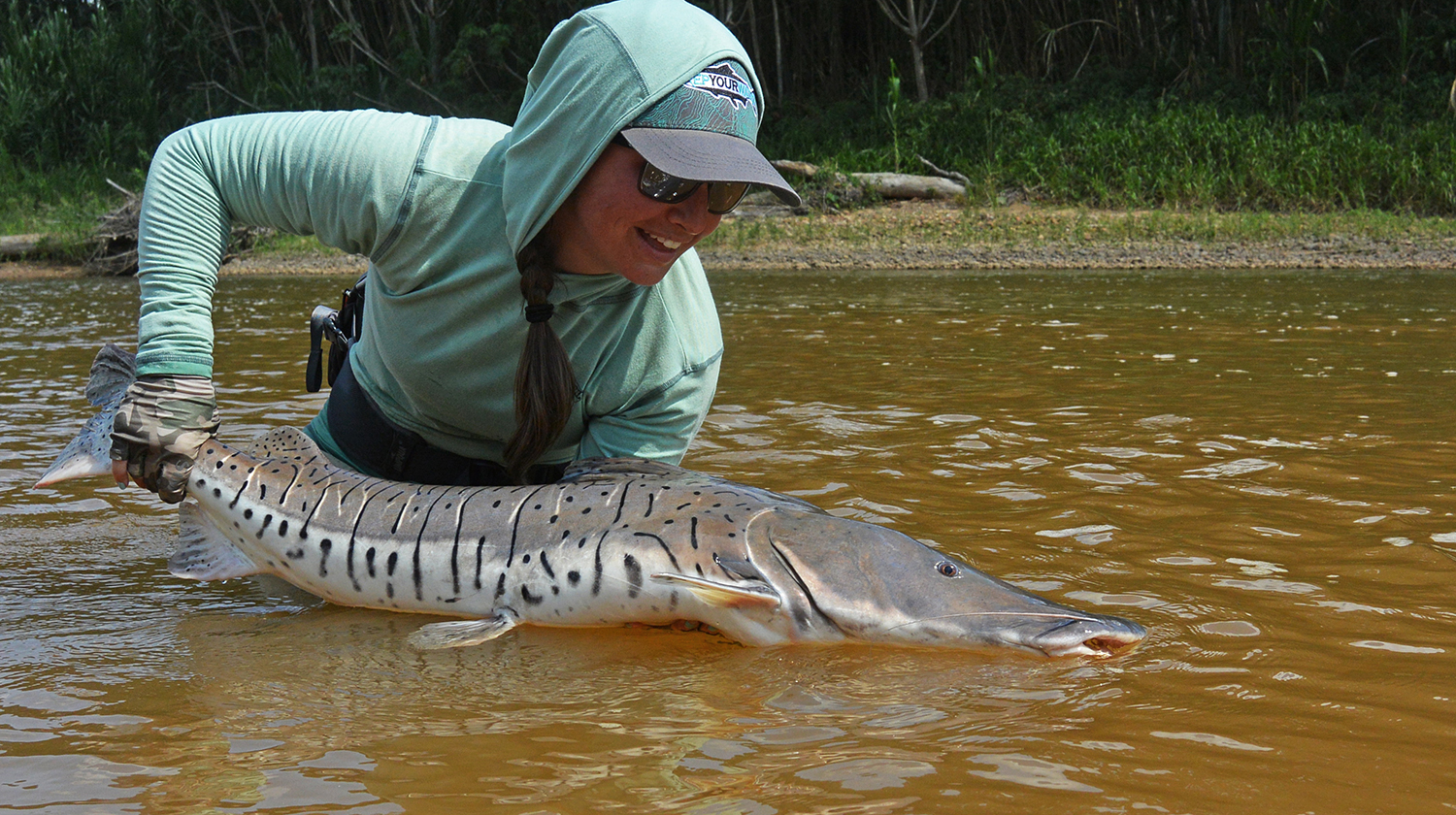 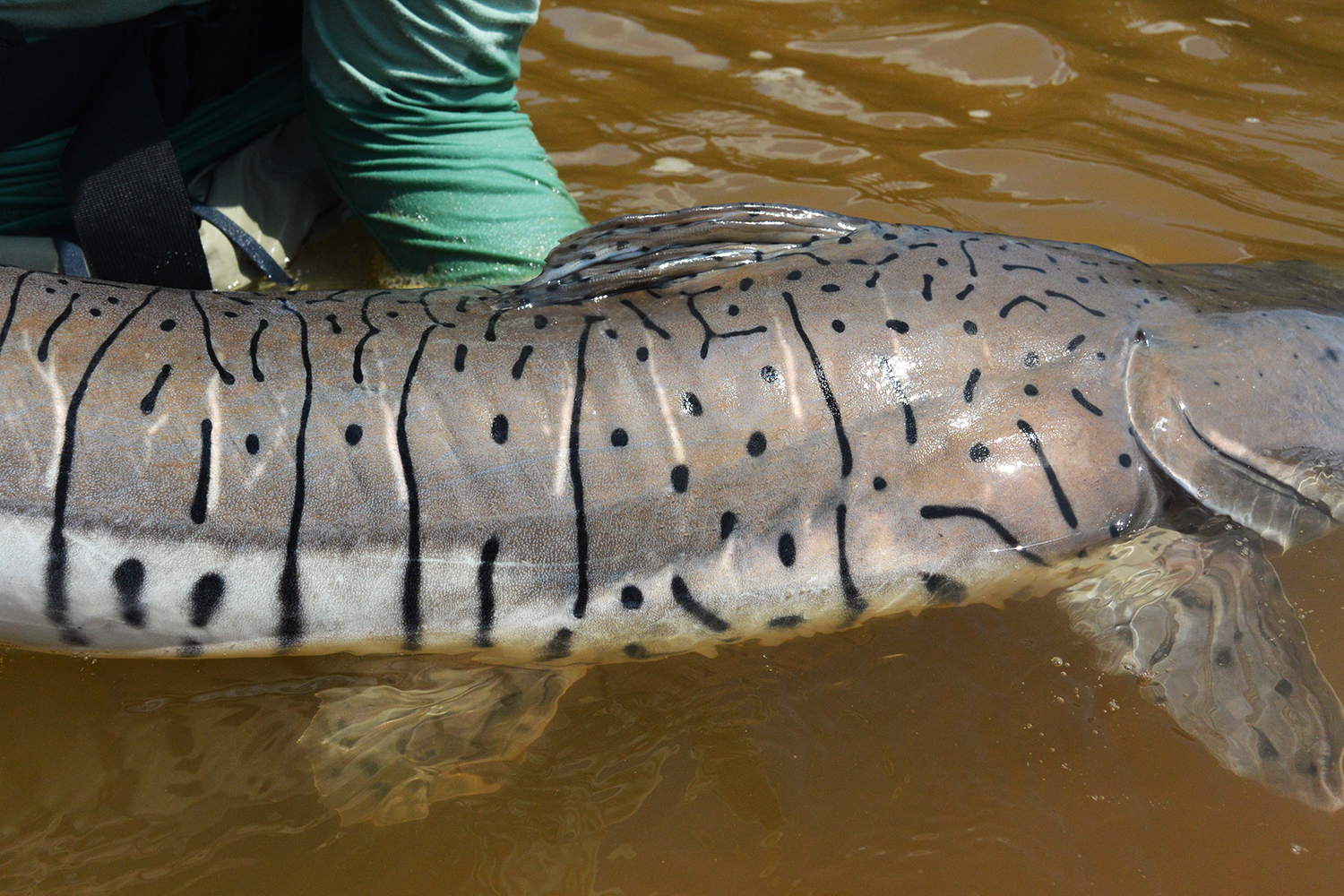 While the fishing was amazing during our week at the Secure River Tsimane Lodge, with multiple Golden Dorado landed that approached or reached the 20lb mark, the sentiment that stayed with us was the power of such a wild, intact place and ecosystem. We hope to return this July, pending the global travel situation, but if we do not make it back this summer, we will get there at some point. The wildness and intensity are something you want to experience again.